Bergh Apton Conservation Trust owns and manages a nature reserve of about 10 acres (4 ha) on the northern side of the Chet Valley, stretching from the River Chet up the slope to Bergh Apton Church. The whole area is designated a County Wildlife Site (CWS 2222). The reserve comprises two adjacent areas, with distinctly different habitats, connected by an isthmus about halfway down the valley side: Church Plantation and Valley Marsh.

The purchase of 4.25 acres (1.72 ha) of mixed woodland, with grassy clearings and patches of scrub, prompted the formation of the trust in 1994. Subsequently, the donation of a small parcel of land to rationalise the southern boundary increased the area to 4.5 acres (1.82 ha). Historically, it has been w00oodland but in the 20th century gravel was extracted commercially, notably for the construction of Seething airfield. We believe that gravel was last extracted in the early 1970s and there was no management after that until 1994. The sands and gravels characteristic of this site would have been deposited by the river, mainly as the glaciers melted after the last ice-age. The irregular topography is a legacy of successive episodes of gravel extraction. Lenses of gravel deposits were excavated leaving deep holes superimposed on the overall slope of the valley side; where the excavations have reached the water table, there are two small ponds.

There are many oak trees (Quercus robur), most of the older ones are multi-stemmed, having been coppiced at some time, probably as a result of the gravel working, but the younger ones are usually standards. The commonest tree currently however is sycamore (Acer pseudoplatanus), a prolific seed-producer and the fastest invader after the disturbance ceased. Ash (Fraxinus excelsior) is also common in the canopy, with some Scots pine (Pinus sylvestris). The understorey, where present, includes hazel (Corylus avellana), hawthorn (Crataegus monogyna), holly (Ilex aquifolium) and elder (Sambucus nigra). The thickets of scrub are dominated by brambles (Rubus fruticosus agg.), gorse (Ulex europaeus) and broom (Sarothamnus scoparius). The grassy clearings, previously maintained by rabbit grazing, are accompanied by substantial stands of stinging nettles (Urtica dioica) and bracken (Pteridium aquilinum). Features of the varied ground flora in spring are swathes of bluebells (Hyacinthoides non-scriptus) under old sycamore coppice and moschatel (Adoxa moschatellina). Rabbit scrapes formerly allowed the establishment of annuals and other plants able to exploit disturbance and local nutrient enrichment but rabbit activity has declined considerably in recent times.

Our long-term management objective is to restore Church Plantation to oak woodland. To this end, we remove sycamores selectively where this will ‘release’ young oaks and also have planted locally-sourced oak saplings from time to time. Cut wood is piled to decompose on site to provide habitat for invertebrates and fungi, or sometimes used in the construction of steps and fences. We also cut bracken and stinging nettles where necessary to contain their spread. Previously we have used rabbit-proof exclosures to promote the re-establishment of vegetation in the face of overgrazing, a management activity not currently necessary. We strive to maintain accessibility by clearing paths and constructing flights of steps on the steeper slopes. Nesting boxes for barn, tawny and little owls, as well as for smaller birds and bats, are aimed at providing more niches for animal life over the whole reserve.

We added 5.5 acres (2.23 ha) of marshland in the valley bottom to our portfolio in 2007. In contrast to Church Plantation, the soil here is deep fen peat. Much of the area was former grazing marsh with two large stands of mature alder (Alnus glutinosa) carr. There was also a large, deep pond, constructed in 1997 as part of the surface-water drainage scheme for the Bergh Apton closed land-fill site. This pond overflows into one of two parallel dykes that drain into the river Chet. The marsh was dominated at that time by a crop of 70 over-age cricket-bat willows (Salix alba var. caerulea), planted in rows. Stinging nettles, more than 2 m high in places, dominated the herb layer.

Our main management objective has been to restore Valley Marsh to a species-rich wetland with a variety of habitat types. The primary requirement was to remove the cricket-bat willows, which were causing shade and evaporating water from the marsh in summer. This was finally achieved in 2013. The stumps have been ground down to facilitate cutting of the vegetation. This cutting, using a reciprocating power scythe is the main management tool for the marsh vegetation. Repeated annual mowing and removal of the herbaceous vegetation to a few giant compost heaps has transformed the plant communities, which are now a colourful mix, featuring red campion (Silene dioica), greater willowherb (Epilobium hirsutum), meadowsweet (Filipendula ulmaria), tufted vetch (Vicia cracca), hemp agrimony (Eupatorium cannabinum), ragged robin (Lychnis flos-cuculi), lesser pond sedge (Carex acutiformis) and reed canary grass (Glyceria maxima), amongst many other species.

We now have a single common spotted orchid (Dactylorhiza fuchsii) and, transiently, have had bee orchids (Ophrys apifera). The paths are cut more frequently to allow access.

The original pond, by virtue of its role in the drainage system and location, is nutrient-rich and depleted in oxygen supply. The surface is dominated by a dense cover of duckweeds (especially the invasive lesser duckweed, Lemna minissima). However, it provides habitat for water voles and ducks – as well as many invertebrates. We have cleared trees from its boundary and built a pond-dipping platform to provide better access for visitors of all ages. The most recent development, in 2016, was to augment this by excavating a new pond with tiered shelves in the valley-bottom peat. This pond is groundwater-fed and has gin-clear water – so far – facilitating rapid colonisation by stoneworts (Chara vulgaris), limestone-encrusted algae that are discerning indicators of excellent water quality. It has already proved a magnet for dragonflies, whether flying, mating, laying eggs or emerging from their nymphs.

The wet woodland (carr) of mature alder (Alnus glutinosa) harbours a fine population of buckler ferns (Dryopteris dilatata) and requires little management. Although we have ‘slubbed out’ the silted-up dykes to diversify the habitats for aquatic life, we have also dammed them to reduce drainage to the river and retain more water on the marsh, especially in summer.

We see a diversity of animal life, ranging from deer to grass snakes and slow worms. Live-trapping, analysis of barn owl pellets and other signs has revealed 12 mammal species over the whole reserve (including useful records for yellow-necked mouse, water shrew and water vole). Graham Moates has kindly provided a detailed report on the status of our mammals. We have signed up with the Norfolk Mink Project and deployed a ‘mink raft’ to support mink control within our part of the Chet, in the hope of protecting water voles from this scourge. 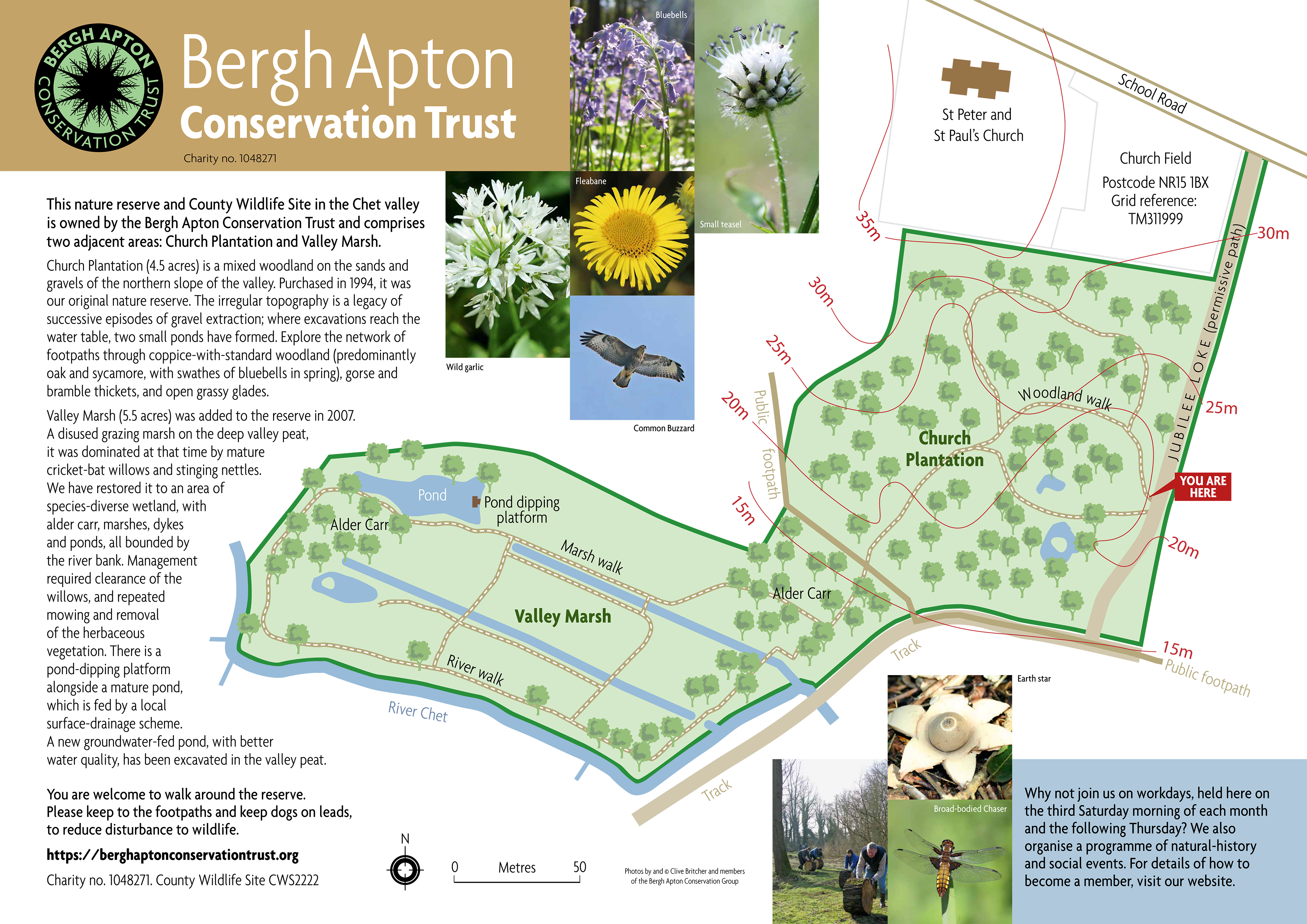